The picture above depicts a well known figure in our nation's history.  Not only was this man a Founding Father of the United States, but he is also known to be the "Father of our Fire Service".  You guessed it, this man is Benjamin Franklin himself.  Ben Franklin founded the Union Fire Company in Philadelphia, Pennsylvania in 1736.  This fire company was the first volunteer fire company of its kind in the U.S.  Soon after this volunteer fire company sprung up, more and more fire companies spread across the city and soon all over the country. 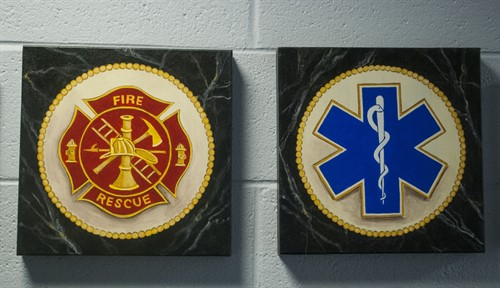 The two symbols above represent the The Maltese Cross (left) and The Star of Life (right).  The Maltese Cross is a symbol of protection and is a badge of honor.  This emblem had its beginnings during the time of the Crusades and was a symbol of the knights during that time period.  The Knights of St. John fought the Saracens for possession of the holy land, they encountered a new weapn unknown to any European warrior.  This weapon was a simple, yet horrible device of war: fire.  The Crusaders advanced on the walls of the city and were continuously struck by glass bombs that were filled with a higly flammable liquid known as naptha.  While the warriors were covered with this liquid, the Saracens would throw flaming torches at them and most of these warriors burned alive.  Others risked their own lives to save their fallen brothers.  This is how our first firemen came to be.  Their heroic efforts were honored with a badge of honor: a cross similar to the cross that firefighters wear today.  The Knights of St. John lived on an island in the Meditteranian Sea for almost four centuries named Malta, this is where the name for the Maltese Cross came about.

The Star of Life was adapted from the personal Medical Identification Symbol of the American Medical Association.  Each of the six bars on the Star of Life has a separate meaning: detection, reporting, response, on-scene care, care in transit, and transfer to definitive care.  If you look to the center of the star, you will notice a serpant wrapped around a staff.  These two symbolize the staff of Asclepius, an ancient Greek physician known as the god of medicine.  The staff, overall, represents medicine and healing, while the serpant represents renewal. 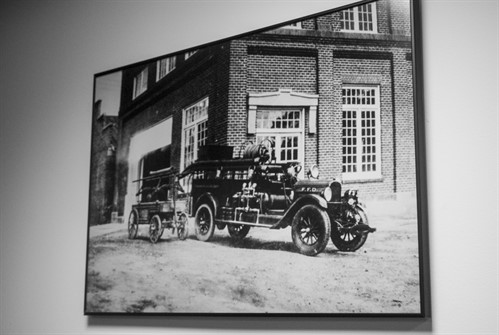 Depicted above is a firetruck dated around the 1920s.  Trucks back in this time period were not equipped like today's fire engines.  As you look closely, you can see this fire truck pulling a water pump, which was how fires were put out in this era. 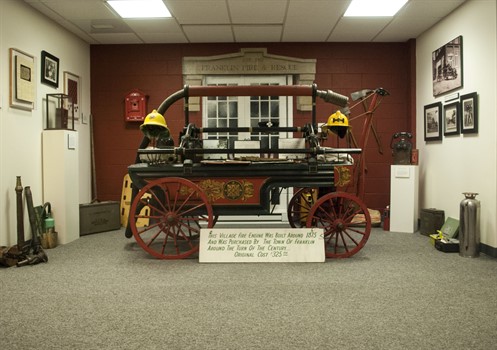 Back in the late 1800s and throughut most of the early 20th century, firefighters used what is known as a hand pump fire engine.  This device was either pulled by an early model firetruck or attached to a horse drawn carriage.  In years past, it used to be pulled by hand.  These fire engines have long bars that run parallel to the body of the engine that operate the pump.  These bars, when pushed up and down, operate a set of pistons in the engine which alternately suck water out of the tub (located in the center of the engine), and force it into a pressure chamber.  The air trapped in this chamber provides constant pressure and evens out the spurts as water is sprayed out of the hose.  Being that the average amount of pumps per minute for this machine was around 60, an average man could only last but a few minutes at a time.

This particular hand pump fire engine was built around 1875 and was purchased by the Town of Franklin around the turn of the century. 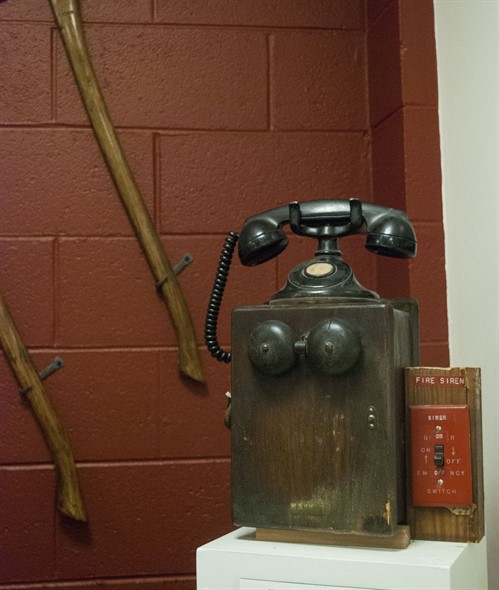 The picure above depicts what is known as a Western Electric Phone.  This phone was used by the dispatcher to ring the special phones located in the volunteers' houses.  The dispatcher would either ring North side or South side.  Whichever side of the town the phones went off was where the fire would be located. 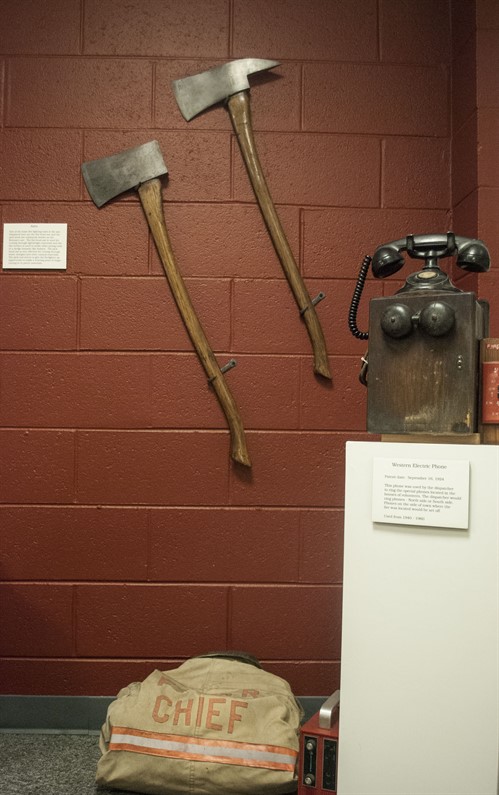 Commonly known fire fighting tools are the flathead axe (left) and the pick head axe (right).  The flat head axe is used mainly for cutting through lightweigt materials and the flat surface is used mainly to strike other prying tools in a sledge hammer like fashion.  The pick head axe on the other hand is used to cut through heavier, denser materials like wood, shingles, and other natural materials.  The pick end serves to give firefighters an opportunity to make a starting point to begin cutting or to pierce materials that can't be pried by hand. 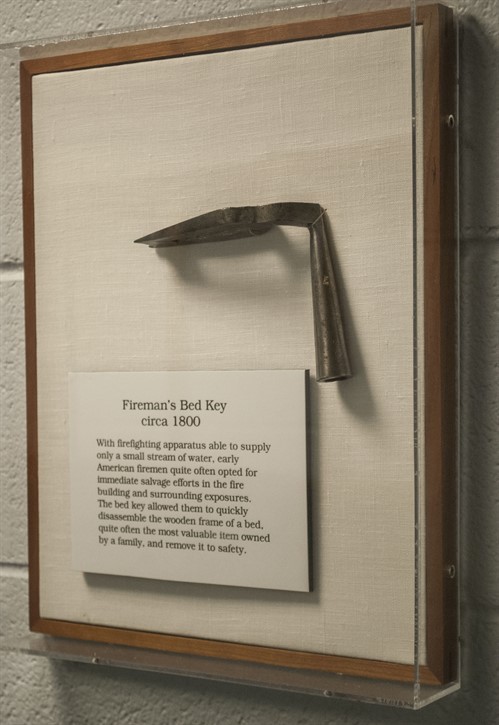 Since the supply of water to burning buildings in this time era was so little, firemen carried different tools with them to salvage personal items of the victims of the fire.  One of these tools was known as a bed key.  Since the bed was often the most valuable item owned by a family back in the late 1700s and early 1800s, firemen carried around the bed key which allowed them to disassemble the wooden bed frame quickly and efficiently and remove it safely. 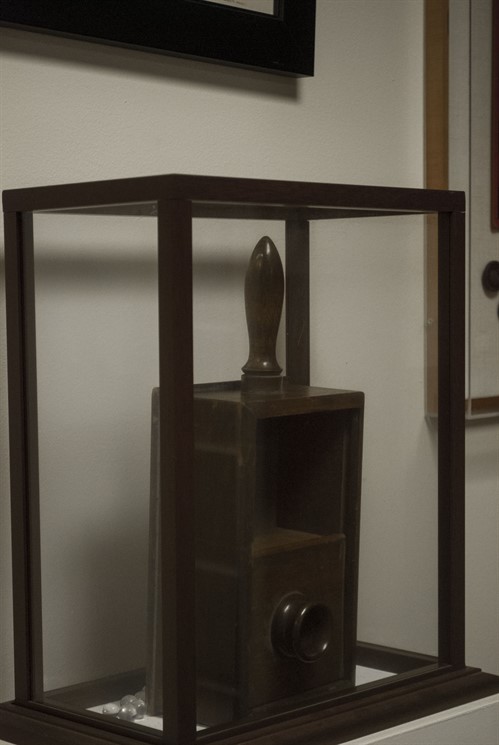 A ballot box was the most common way for members of a fire department to cast their votes on electing new members into the organization.  Members would cast their vote by putting in a white or clear marble, which represented "yes", or a black ball, which represented "no".  If any black ball appeared in the ballot, the membership for that person would be denied.  Here, the term "blackballed" came to be.